The Ocean Corporation in Houston Texas runs a Commercial Diving Experience Fantasy Camp once a year.

Most people who really love to Scuba dive think about how to make money from it. There are 2 main routes. People either become professional Dive Instructors, working in a shop or resort, teaching people to Scuba Dive. The other route is to become a  Commercial Diver. For those of you who’ve ever thought about becoming a Commercial Diver, this is a great way to see if it’s all you thought it would be.

On Saturday, we turned up bright and early. Over breakfast tacos, we learnt some of the basic safety involved in Commercial Diving. We go over the equipment that commercial divers use, some of the history of commercial diving, how to communicate underwater and any questions that people might have.

They also had a guest speaker who brought in the traditional Commercial Diving outfit from the early days and had one of the guys in class try it on.

We then head to the 12ft pool for orientation. We got to bounce around and get used to those super huge hats. After lunch, we head to the 24ft tank where we breathe surface supplied heliox, which makes you sound like a chipmunk. We practiced undoing the bolts on a “dive platform”, lowering the rig then sending it up with a balloon. Travis and I then put it back together. It’s amazing how difficult small tasks become when underwater. You have no peripheral vision with the hat on. It’s cold and your hands shake. My hat kept filling up with water….

Then, it’s off to the Deco chamber. This is where I discovered I don’t like to be locked into small spaces! I also don’t do that well with oxygen, which we had to suck in while in the chamber. Thankfully I had good company in there in the form of Travis Marshall. He’s a journalist for Scuba Diving Magazine. You can see his article on the Camp CDE weekend over at the Scuba Diving Mag website.

While people are doing their best at putting an oil platform together, other people got to play with the Remotely Operated Vehicle. (ROV) The underwater footage on the clip above actually came from that, so the quality is pretty decent.

About 5pm we call it a day and retreat to our hotels, exhausted. Travis and  I were lucky enough to be invited out to dinner by the owner of Ocean Corp. Houston has some swanky restaurants, and we ate well.

Next morning, we all came back after a good nights sleep. Over breakfast, we had a briefing on underwater welding and cutting. Then, it was time to get into the tanks again. The cutting tank was black after the few few people. You couldn’t see a thing, except a fire underwater. I opted out of that one. I did make it into the weld tank. I was very nervous, since in my mind, water and electricity don’t mix. I did it though and I was pretty proud of myself. Even if my welding attempt did suck. I think at the time I thought I was in the cut tank, so that explained a bit….

After lunch, we all went into the classroom. We were given beautiful certificates to show we had completed the weekend. This was one of those places that was definitely worth coming to, even if you had never thought of being a commercial diver. It was great to experience life in someone else’s shoes. I know I could never do that deco tank again, so Commercial Diving is out for me. But I’m sure glad I got to try it! 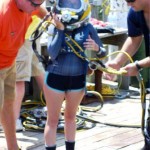 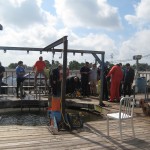 Special thanks to Kirk P. McLean for doing the underwater photography at the last minute!

[…] Camp CDE page is up. Last year I got to go spend the weekend at Camp CDE, a Commercial Diver Experience […]

[…] in, the first person I saw was Dustin, a diver I had previously met in Houston at Camp CDE. He was on his way out and it was nice to see someone I knew right off the […]