San Antonio is where I’ve lived for the past 10 years. It’s the home of the Alamo, The Spurs, The Riverwalk and is considered one of the best convention cities in America.

San Antonio is about 3 hrs to the nearest beach, Corpus Christi. When I first moved here, I didn’t understand why there was so many boats shops, or Scuba Diving stores. However, there are actually several places to go diving less than an hour away from downtown San Antonio.

Just NE of town, there’s Canyon Lake. To the west, there’s Medina Lake. Every year, TrashFest is held in New Braunfels, about 20 mins north on IH-35 in the Comal and Guadalupe Rivers.

San Antonio was voted the #2 spot for Best Family Vacation in the USA: 2010

Whether you live in San Antonio, or are sent here for a convention, there’s plenty in town to see and do. When I first moved to San Antonio, it was not the Texas I was expecting. There weren’t any cowboys or oil fields. San Antonio is much more like a Mexican town. Full of colour and spirit, Spanish is just as widely spoken as English. Tex Mex is the flavour in most restaurants. There’s even Market Square a short walk from downtown, where you can shop all things South of the Border. A Little further out and you’ve got the Six Flags Fiesta Texas and Sea World theme parks. Drive about an hour out, and you finally hit Cowboy Country.

The San Antonio Riverwalk and The Alamo.

The Riverwalk is a winding river, with restaurants, hotels and boutique shopping. There are river cruises for sight seeing or full dinner cruises. Every night, the Riverwalk is packed full of people enjoying a stroll under the tall trees. At Christmas, they light up the river with thousands of lights and on St Patrick’s Day, they dye it green. April is San Antonio’s biggest event, Fiesta. It’s San Antonio’s answer to Mardi Gras. The whole city parties and there are River Parades and all kind of events and functions centered around the San Antonio Riverwalk. King San Antonio and Rey Feo both traditionally stay at Hotels on the Riverwalk and head out to their festivities from there.

The Official San Antonio Riverwalk site has some great information on the history of the Riverwalk.  It lists historic events from 1536 till 2008. The Riverwalk has recently been expanded and now reaches up towards the Pearl Brewery. 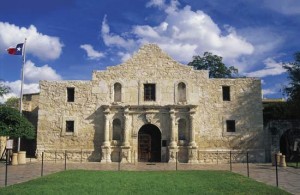 No trip to San Antonio is complete without visiting The Alamo.

The Alamo Originally named Mission San Antonio de Valero, has been a central part of San Antonio since it’s construction started in 1724. The Alamo is part of the Mission Trail, which flows South along the San Antonio river and comprises of 5 different beautiful missions. If you’re feeling fit, you can walk a six mile trail and see all of them. Boy Scouts in San Antonio are often sent out to do the trail to earn a badge. Otherwise, if you have a car, enjoy some air conditioning in the oppressive San Antonio heat!

The Mission Trail starts at The Alamo, most famous for the Battle of the Alamo in 1836. General Antonio López de Santa Anna led his troops to The Alamo and a bloody 13 day battle for The Alamo ensued. Even though the Battle was lost, and many courageous men lost their lives, this was the event that changed many people’s perspectives and pushed people to fight hard, starting with capturing Santa Anna at the Battle of San Jacinto. 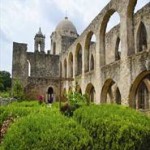 South of The Alamo, is Mission San José. It’s full name is Mission San José y San Miguel de Aguayo. The San José was established on February 23, 1720. Its 300 residents sustained themselves by raising livestock and tending to vast fields. The mission had its own gristmill and granary, which have been restored. Located just South of The Alamo, this was considered the most prosperous of all the missions.
The Church, constructed in 1768 is build using local limestone. Look for elaborate carvings and the Rose Window. 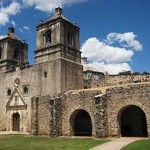 Full name Mission Nuestra Señora de la Purísima Concepción de Acuña was established in 1716 as Nuestra Señora de la Purísima Concepción de los Hainais in East Texas. The mission was moved in 1731 to San Antonio. Founded by Franciscan friars, this is the best preserved of the Texas missions. The structure is, in fact, the oldest un-restored church in America. Regular church services are still held every Sunday. 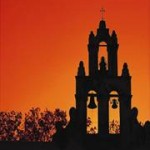 Mission San Juan Capistrano, was originally christened in 1716 as La Misión San José de los Nazonis and located in East Texas. The chapel and bell tower are still in use. The chapel, priests’ quarters, and other structures were reconstructed during the 1960s. 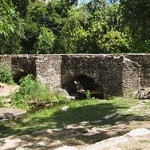 This is my personal favourite of all the missions.

This mission contains the best-preserved segment of the acequia (irrigation system) that was used to bring water to the fields. The main ditch continues to carry water to the mission and its former farm lands. This water is still used by residents living on these neighboring lands. You can walk over the aqueduct through the trees and cool off on hot summer days.

A Little Taste of Mexico 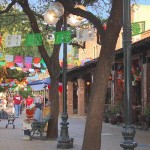 How do you buy beautiful Mexican pottery and ornately patterned sundresses without getting shot at by drug cartels? Easy, you head to Market Square, or El Mercado as the locals call it.

Within walking distance of downtown, is the vibrant Market Square. Strolling along through the shops, the sights, smells and sounds will transport you well south of the border. Whether you’re looking for pottery, silver jewelry, clothing or just some excellent food, this is always a fun side trip.  Primer Sabado, or First Saturday, the square comes alive with music, mariachi and street vendors.

Tower of the Americas 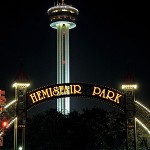 The tower is located in the middle of HemisFair Park and has an observation deck that is accessible by elevator for a fee, currently $10.95 for adults.  In addition, Landry’s operates “Chart House” a revolving restaurant at the top of the tower that provides panoramic views of the city.

Looking for some underground activities? 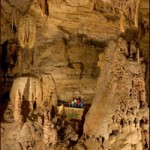 Cascade Caverns and Natural Bridge Caverns are both a short drive from downtown San Antonio.

Cascade Caverns is located in Boerne, TX, up short drive up IH-10 West into the beautiful Texas Hill Country. Cascade Caverns is the first of the six Texas cave attractions to have been discovered and runs guided one hour tours. One of the main attractions is a 90+ foot waterfall that cascades down the walls of the Cathedral Room. It’s also home to several unusual animals including Cliff and Leopard Frogs, Mexican Brown Bats, and Cascade Cavern Salamanders.
Cascade Cavers has a campground and RV park.

Natural Bridge Caverns is NE up IH-35 towards New Braunfels, Texas. It’s about halfway to Canyon Lake, on FM 3009. Natural Bridge Cavers runs several tours, from the easy Discovery Tour, the Illuminations tour, the Lantern Tour to the advanced Adventure Tours. They also have the Natural Bridge Mining Company and Rock Shop which could keep you amused for hours looking for pretty stones. If that’s not enough excitement for the kids in one day, next door there’s the

Natural Bridge Wildlife Ranch.
This is an African Safari, Texas Style. The WildLife Ranch covers over 400 acres in the Texas Hill Country and is home to over 500 animals covering 40 species of Native, Exotic and Endangered wildlife. There’s Zebras, Giraffes, Rhino, a new Lemur exhibit and even a petting zoo for the little ones.