This weekend for all of you in California is the Bay Area Dive Show.

I wish we could make it out to California. The Bay Area Dive Show is run by the same folks who run the Texas Dive Show. It should be a great weekend. We saw some fantastic vendors in Dallas. The Bay Area Dive Show is in Santa Clara, and should be awesome. My favourite artist, Pascal Lecocq is going to to be there with his art work. My other San Antonio local friends and fellow expats, About Australia Diving will also be there. Make sure you stop by and say G’day for me.

The Bay Area Dive Show is a great way to go out and meet some other dive industry professionals face to face, learn about some dive resorts that you might want to visit, and check out some of the new scuba equipment on the market.

If you’re near Santa Clara this weekend, head on over and check out the Bay Area Dive Show. It should be a blast.

I’m not really much of an art buff. I took art in school, but I preferred making things to painting. I’ve never really enjoyed going to art galleries or museums. I find most art to be pretty boring. 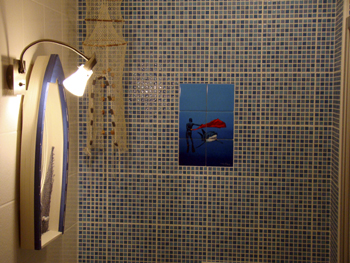 Then I found Pascal Lecocq. The first time I saw his art was at the Dive Show in Houston 2 years ago. Full of breathtaking blues, with surreal scenes of Scuba Divers in various states of non-diving activities. It was breathtaking. It was mesmerizing. It was unforgettable. Pascal was easy to find at the Texas Dive Show in Dallas. A sea of blue, with people standing around, silent, gazing at his paintings. I had finally found art that I admired, that I could just stand in quiet wonder, imagining the scene if it were to come to life. It wasn’t that I didn’t like art after all, I had just never found any that I liked before.

I can imagine filling my house with his art. Pascal even has art on tiles, and I’m imagining when we finally get around to re-doing our bathroom, having several of his pieces right there in my shower, like this lucky person in Switzerland.

Pascal’s signature painting in a Diver with a flag, acting like a bullfighter with a shark.

There are many more that I like, such as the turtles piled on each other, and takes on popular culture, like the divers in the Hollywood Blvd scene.

My personal absolute favourite though, is the long thin painting of a free diver as she heads back to the surface. It evokes a silent calm to a room.

If you’re looking for something beautiful for your house, or even just a nice mug or mousepad, stop by and see Pascals work. He’s even got postcards. I might get a few of those till I can find  a place for the larger stuff…

One of the interesting people we met at the Texas Dive Show was UnderwaterAdvisor.com They are an online Scuba Directory where you can go to find out all about different dive shops, resorts, equipment and almost anything you can think of Scuba related.

While there are sites out there like Travelocity which give reviews on resorts, they don’t go into the specific Scuba detail that Underwater Advisor does. They’ll let you know what kind of air they provide, what size tanks, if breakfast is served early enough to eat before heading out to the boat and if there’s a deco chamber nearby.

People can post reviews on their local dive shop, letting you know if the staff is smart and helpful or just trying to get a bigger commission. They also list local instructors, manufacturers and the list is going.

I think it’s a great idea and a useful tool. I know I’ll be using them from now on!

We headed up to Dallas for the Texas Dive show on Valentine’s Weekend. Driving up from San Antonio, we were worried if we would even make it into Dallas. They had just had record snow. Over 14″ of the stuff. It was not only a record for that day, but for all time. They’d never received that much snow fall in a 24hr period. We started to see snow by the time we got to Georgetown. By the time we got to Waxahachie, everything was white.

Thankfully, as we got to Downtown Dallas, the roads were pretty clear and not too slick. We had waited till later in the day when it was a little warmer to get through Dallas. There’s nothing worse than icy overpasses. We headed through Dallas at peak hour, but being a snow day, traffic was almost non-existent. We made our way to our hotel in Plano/Frisco, dumped our stuff and headed over to check out the Texas Dive Show.

Walking in, the first person I saw was Dustin, a diver I had previously met in Houston at Camp CDE. He was on his way out and it was nice to see someone I knew right off the bat.

We went up to the registration desk, showed them our emails from when we had pre-registered online. They had a good deal going on where if you registered before Christmas, you could get in free. They gave us name tags, we entered into a raffle and then headed inside.

Friday night was only open from 5-8pm. We used that time to go around, see who all was there and introduce ourselves and make sure everyone was OK with being filmed.  We noticed that the Dallas show was a lot bigger than the previous ones in Houston. Matt and I then headed back to the hotel and caught some Zzzz’s after the long drive.

Next morning, we got up and headed back over to the show. I was glad we had gone over the night before, because today everyone was expecting us when we showed up with the camera. Some people were nervous, but everyone did a great job of explaining what they were there for. All the displays were nice and colourful and everyone was full of energy. It should make for a great episode. I should be done editing it this week and have it online by next.

Big thanks to Brad Nolan for letting us come up and film at his show. He did a great job on camera too! We really appreciate everyone letting us come to their booth and taking the time to talk to us. Hopefully, this will inspire people to come out to the next dive show and meet all the fabulous people we got to meet.

I will say though, I think the snow outside made the show inside even better. When you’re shivering walking in, there’s nothing better than seeing a backdrop of some tropical paradise and thinking of diving in those warm waters….

The Texas Dive Show is only a couple of weeks away now. This year they’re having the event up in Dallas.

So far over 600 divers have already registered to attend. There’s a bunch of interesting people exhibiting this year. Everything from my friends and fellow expats at About Australia who will be showcasing all the great Scuba Diving  in Australia to Cochran Computers and Single Divers. There should be everything from Individual Dive Shops, Scuba Gear and Scuba Resorts represented.

I can’t wait to go up to the Texas Dive Show. It’s on Valentine’s weekend, so it’s a good excuse to get out of town. If you’re anywhere within a few hours drive, come on over. We’ll be driving up from San Antonio.  Maybe I’ll see you there!

The Texas Dive Show is being held at the